VANCOUVER, B.C., January 17, 2022: Goldshore Resources Inc. (TSXV: GSHR / OTCQB: GSHRF / FWB: 8X00) (“Goldshore” or the “Company”), is pleased to announce gold assay results from hole MMD-21-007, which continues to demonstrate gold mineralization from the Main Zone of the Moss Lake Gold Deposit in Northwest Ontario, Canada. Significantly, the results suggest a new parallel zone to the southeast that has not been previously tested.

Brett Richards, President and Chief Executive Officer of Goldshore commented: “The intersection of several +1 g/t Au zones, essentially from surface, reaffirms our view that the Moss Lake Gold Project contains a significant volume of +1 g/t Au mineralization that can underpin a meaningful update to the historic 2013 preliminary economic assessment later this year. The fact that we are continuing to intersect gold mineralization outside of the volume modelled in 2013, also affirms our belief that the deposit is significantly larger than previously interpreted.”

Figure 1 shows the location of the project in Northwest Ontario. Figure 2 is the drill section for MMD-21-007. Table 1 summarizes the significant intercepts. Figure 3 and Table 2 show the drill hole location. 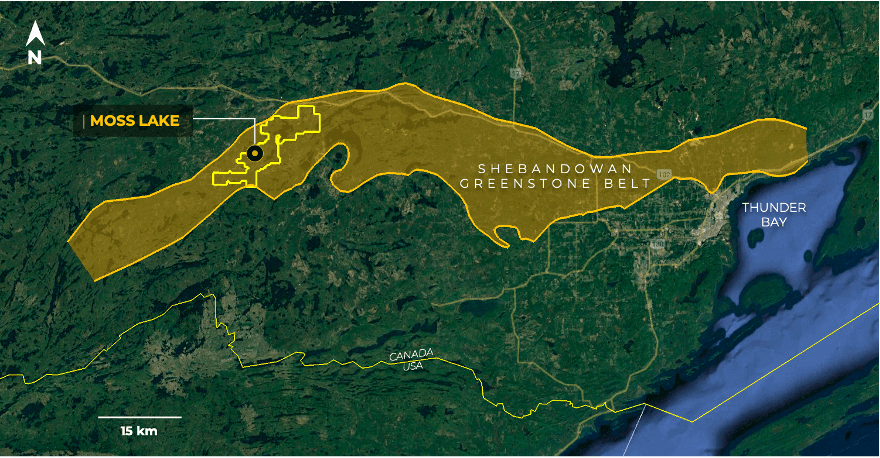 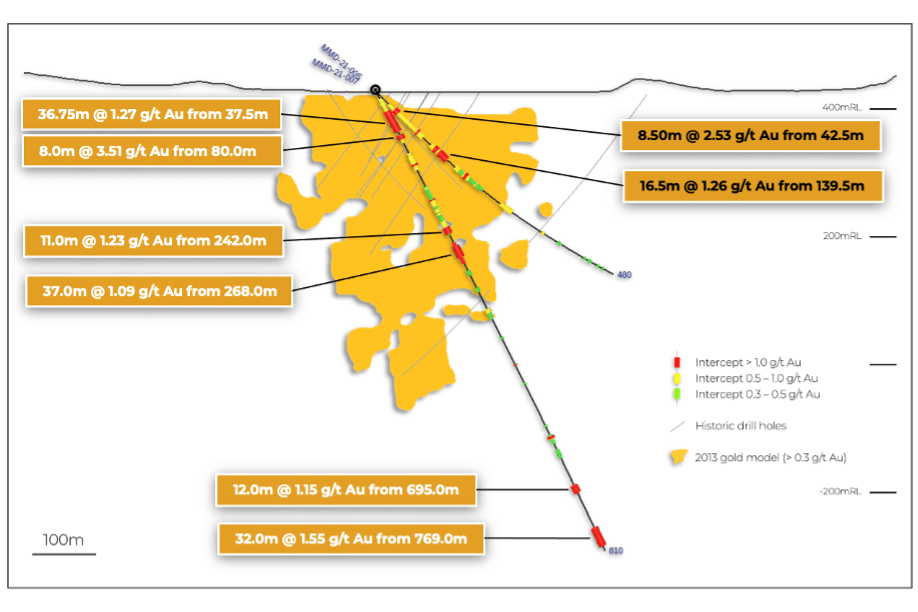 Figure 2: Drill section through MMD-21-005 (in black; reported on December 8, 2021) and MMD-21-007 showing mineralized intercepts relative to the 2013 grade model and extending mineralization by approximately 200 meters to the southeast 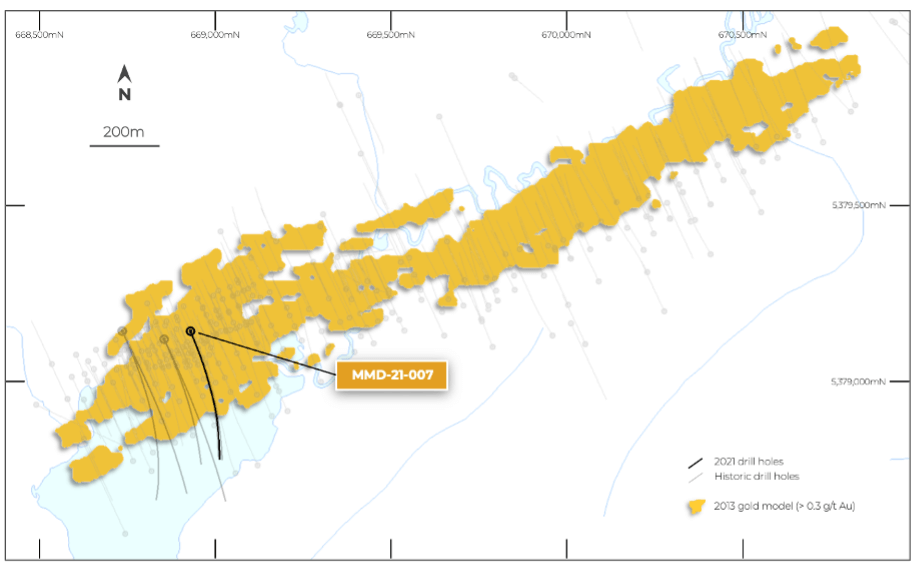 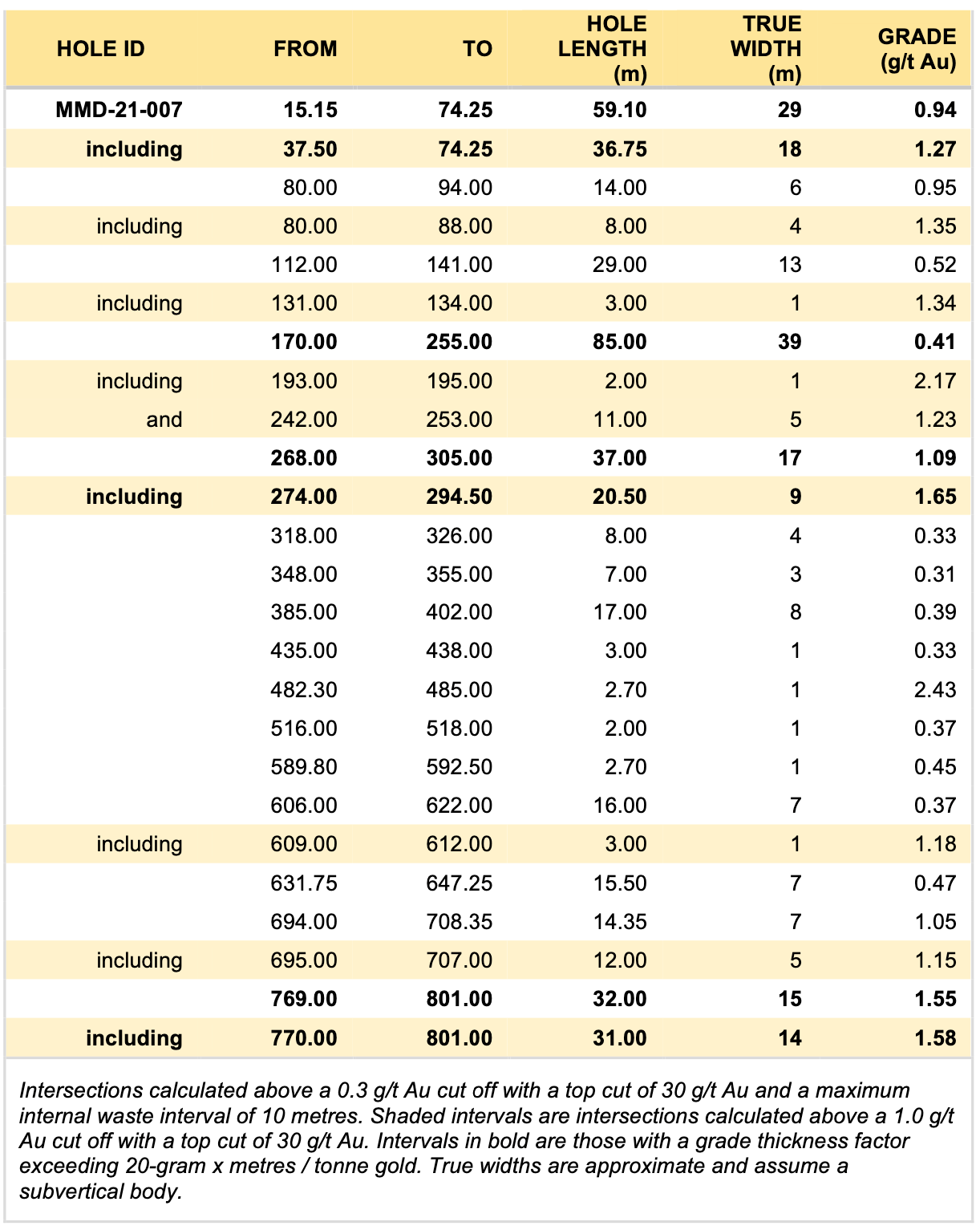 Table 2: Location of drill holes in this press release

MMD-21-007 was drilled at -65° beneath MMD-21-005, which was reported by the Company on December 8, 2021. It drilled through a massive diorite intrusion emplaced within a NE-striking and steeply SE-dipping sequence of intermediate to mafic lavas and felsic to intermediate volcaniclastic rocks. The hole intercepted a second massive diorite intrusion at the end of the hole which it did not fully penetrate. This looks to be a previously untested parallel zone.

Later porphyritic and fine grained intermediate and mafic dikes cut the preceding rocks. These are variably foliated to massive, suggesting that the later intrusions post-date metamorphism. All, but these later intrusive phases, are variably altered with quartz-sericite, albite-sericite and chlorite-epidote assemblages. The limited drilling of the second diorite intrusion shows it to have a similar alteration assemblage as the first apart from containing a biotite-magnetite assemblage. Quartz-calcite±chlorite±tourmaline veinlets occur as a weak stockwork in the more brittle-deformed rocks. Disseminated and veinlet pyrite is common throughout and there is occasional chalcopyrite and molybdenite mineralization.

In addition to several narrow high-grade zones, MMD-21-007 intersected 32.0m @ 1.55 g/t Au from 769m associated with the newly recognized parallel body of altered diorite. This zone would extend up-dip beyond the end of MMD-21-005, suggesting that mineralization is potentially 200 meters (48%) wider than the modelled width of approximately 420 meters. It also shows that the mineralized structures extend much deeper than the modelled volume.

Peter Flindell, VP Exploration commented: “Drilling of the Main Zone continues to prove up the large volume of mineralized diorite intrusion, likely within an anticlinal axis, that is cut by several higher-grade structures hosted our +1 g/t Au intercepts. The discovery of a second, parallel mineralized intrusion is encouraging and highlights the potential to expand the volume of mineralized material in the Moss Lake Gold Deposit.”

All samples were sent to ALS Geochemistry in Thunder Bay for preparation and analysis was performed in the ALS Vancouver analytical facility. ALS is accredited by the Standards Council of Canada (SCC) for the Accreditation of Mineral Analysis Testing Laboratories and CAN-P-4E ISO/IEC 17025. Samples were analyzed for gold via fire assay with an AA finish (“Au-AA23”) and 48 pathfinder elements via ICP-MS after four-acid digestion (“ME-MS61”). Samples that assayed over 10 ppm Au were re-run via fire assay with a gravimetric finish (“Au-GRA21”).

In addition to ALS quality assurance / quality control (“QA/QC”) protocols, Goldshore has implemented a quality control program for all samples collected through the drilling program.  The quality control program was designed by a qualified and independent third party, with a focus on the quality of analytical results for gold.  Analytical results are received, imported to our secure on-line database and evaluated to meet our established guidelines to ensure that all sample batches pass industry best practice for analytical quality control.  Certified reference materials are considered acceptable if values returned are within three standard deviations of the certified value reported by the manufacture of the material. In addition to the certified reference material, certified blank material is included in the sample stream to monitor contamination during sample preparation. Blank material results are assessed based on the returned gold result being less than ten times the quoted lower detection limit of the analytical method.  The results of the on-going analytical quality control program are evaluated and reported to Goldshore by Orix Geoscience Inc.

Goldshore is an emerging junior gold development company, and owns the Moss Lake Gold Project located in Ontario. Wesdome Gold Mines Ltd. is currently a strategic shareholder of Goldshore with an approximate 26% equity position in the Company. Well-financed and supported by an industry-leading management group, board of directors and advisory board, Goldshore is positioned to advance the Moss Lake Gold Project through the next stages of exploration and development.

About the Moss Lake Gold Project

Moss Lake hosts a number of gold and base metal rich deposits including the Moss Lake Deposit, the East Coldstream Deposit (Table 1), the historically producing North Coldstream Mine (Table 2), and the Hamlin Zone, all of which occur over a mineralized trend exceeding 20 km in length. A historical preliminary economic assessment was completed on Moss Lake in 2013 and published by Moss Lake Gold¹. A historical mineral resource estimate was completed on the East Coldstream Deposit in 2011 by Foundation Resources Inc²,³. In addition to these zones, the Moss Lake Gold Project also hosts a number of under-explored mineral occurrences which are reported to exist both at surface and in historically drilled holes. The Moss Lake Deposit is a shear-hosted disseminated-style gold deposit which outcrops at surface. It has been drilled over a 2.5 km length and to depths of 300 m with 376 holes completed between 1983 and 2017. The last drilling program conducted in 2016 and 2017 by Wesdome Gold Mines Ltd. (“Wesdome”), which consisted of widely spaced holes along the strike extension of the deposit was successful in expanding the mineralized footprint and hydrothermal system 1.6 km to the northeast. Additionally, the deposit remains largely open to depth. In 2017, Wesdome completed an induced polarization survey which traced the potential extensions of pyrite mineralization associated with the Moss Lake Deposit over a total strike length of 8 km and spanning the entire extent of the survey grids.

The East Coldstream Deposit is a shear-hosted disseminated-style gold deposit which locally outcrops at surface. It has been drilled over a 1.3 km length and to depths of 200 m with 138 holes completed between 1988 and 2017. The deposit remains largely open at depth and may have the potential for expansion along strike. Historic drill hole highlights from the East Coldstream Deposit include 4.86 g/t Au over 27.3 m in C-10-15 from previous / historical exploration.

The historically producing North Coldstream Mine is reported to have produced significant amounts of copper, gold and silver⁴ from mineralization with potential iron-oxide-copper-gold deposit style affinity. The exploration potential immediately surrounding the historic mining area is not currently well understood and historic data compilation is required.

The Hamlin Zone is a significant occurrence of copper and gold mineralization, and also of potential iron-oxide-copper-gold deposit style affinity. Between 2008 and 2011, Glencore tested Hamlin with 24 drill holes which successfully outlined a broad and intermittently mineralized zone over a strike length of 900 m. Historic drill hole highlights from the Hamlin Zone include 0.9 g/t Au and 0.35% Cu over 150.7 m in HAM-11-75. 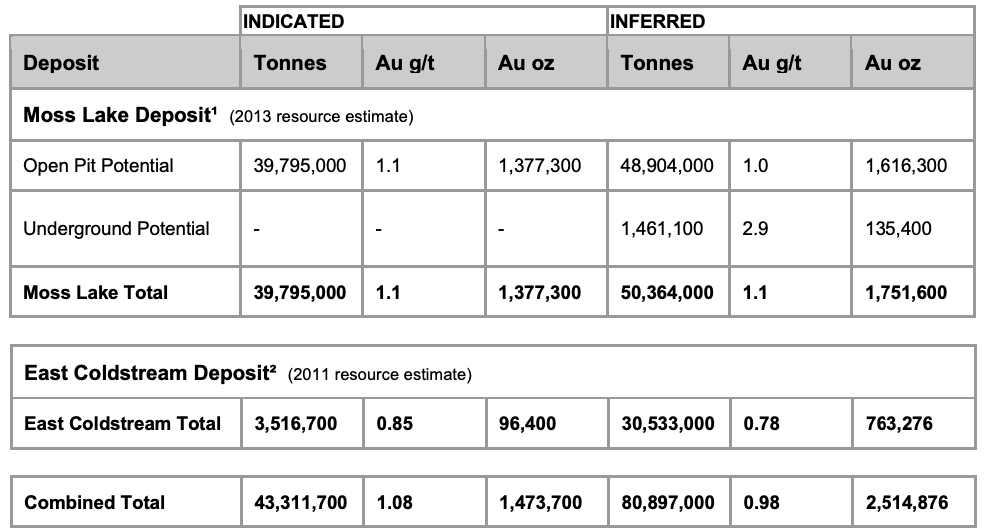 Peter Flindell, MAusIMM, MAIG , Vice President, Exploration of the Company, a qualified person under NI 43-101, has approved the scientific and technical information contained in this news release.

Neither the TSXV nor its Regulation Services Provider (as that term is defined in the policies of the TSXV) accepts responsibility for the adequacy or accuracy of this release.

Forward-looking statements in this news release include, among others, statements relating to expectations regarding the exploration and development of the Moss Lake Gold Project, including planned drilling activities and testing of targets, and other statements that are not historical facts. By their nature, forward-looking statements involve known and unknown risks, uncertainties and other factors which may cause our actual results, performance or achievements, or other future events, to be materially different from any future results, performance or achievements expressed or implied by such forward-looking statements. Such factors and risks include, among others: the Company may require additional financing from time to time in order to continue its operations which may not be available when needed or on acceptable terms and conditions acceptable; compliance with extensive government regulation; domestic and foreign laws and regulations could adversely affect the Company’s business and results of operations; the stock markets have experienced volatility that often has been unrelated to the performance of companies and these fluctuations may adversely affect the price of the Company’s securities, regardless of its operating performance; and the impact of COVID-19.

Meet the experienced team behind the scenes at  Goldshore Resources

Everything you need to know to start investing in Goldshore Resources

This website discloses historical production from the North Coldstream Deposit. The source of such disclsoure is as follows: Schlanka, R., 1969. Copper, Nickel, Lead and Zinc Deposits of Ontario, Mineral Resources Circular No. 12, Ontario Geological Survey, pp. 314-316.